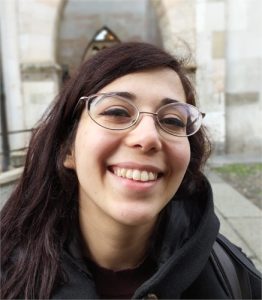 Anna Cavazzoni graduated in Foreign Languages and Literatures in 2017 from the University of Bologna with a thesis in Russian literature entitled „Jurij Oleša’s Envy: comparing two translations“ supervised by Professor Alessandro Niero. During her studies, she attended a course in Polish language and literature at the Jagiellonian University thanks to a scholarship from the Polish Government. In 2020 she obtained her Master’s degree in Modern, Comparative and Postcolonial Literature at the University of Bologna with a thesis in Polish Literature entitled „Juliusz Słowacki’s letters to his mother: a critical and translational study“, dedicated to the translation of the Polish poet’s letters written in Italy and written under the supervision of Professor Andrea Ceccherelli. During her master’s degree, she studied in Poland (University of Poznań) and in Russia (RUDN). Thanks to a scholarship from the Ministry of Foreign Affairs, she had the opportunity to carry out an internship at the Italian Institute of Culture in Krakow. In May 2020 she took part in the Eighth International Conference of Master’s Students (VIII Międzynarodowa Konferencja Magistrantów) organised by the University of Katowice with a paper on the translation of the epistolary genre. Her research is currently devoted to the study of the processes of creation of Ukrainian identity by the writers Nikolaj Gogol‘ and Juliusz Słowacki in their autobiographical writings and correspondence.