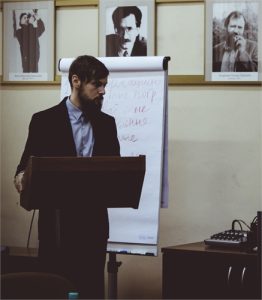 Ilia Kozlov earned his bachelor’s and master’s degrees in journalism from Lomonosov Moscow State University in 2015 and 2017, respectively. During his university years at the Department of TV and radio broadcasting, Kozlov’s research areas of study were concerned with various journalistic practices and techniques in a reporter’s work, including news narratives, a transformation of stand-up elements in news reporting, an interviewer’s roles and approaches in conducting interviews, and others. From 2012 to 2018, he worked as a news reporter for the national sports channel Match TV, covering some of the most prominent sporting events such as the Olympics in 2014 and 2016, the Youth Olympics in 2014, a wide choice of world championships, the Dakar rally, the UEFA Champions League and Europa League. Since 2021, Ilia Kozlov enrolled in the joint double degree Ph.D. program of German and Slavic Studies at Sapienza University (Rome, Italy) and Charles University (Prague, Czechia) with his research project dedicated to the interplay between media studies and stylistics.